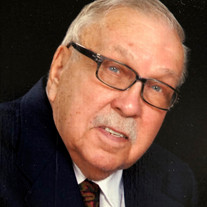 William "Bill" Patrick Coley of Lowell, OH gently passed away on February 6, 2021 after a valiant struggle with vascular dementia and Parkinson's disease. He was just shy of his 87th birthday and was surrounded by family. Bill Coley was born in Streator, IL to James "JJ" and Faye. He was a dedicated son and brother to Joe, John, Alan, Marion, Linda, Christine, and Sheila. Through his close relationships with his family and friends from Streator, Bill remained connected to his hometown of Streator throughout his life. Bill was stationed in Japan as a Navy Radioman during the Korean War. He could recall his Morse Code his entire life…dit daw dit dit. The GI bill offered Bill an opportunity to attend Northern Illinois, and he ultimately graduated from Bradley University with an Accounting degree. During a brief visit home, on leave from the Navy, Bill met Margaret "Peg" Nink. After years of love letters and supporting each other through college and nursing school, they married in Streator, IL in 1958. Within 6 years they had 6 kids: Pati (Robert Good), William (Carolyn), Daniel (Laura), Curtis (Jamie), Richard (Sharon), and Karen (Brian). As a family, they loved camping, fishing, and sports. Bill coached his kids' baseball and youth football teams and was a lifelong Ohio State Buckeye fan. A very handy guy and HGTV aficionado, Bill built two major home additions, one for his Mom and sisters and one for his growing family. A career opportunity for Bill meant a family move from Country Club Hills, IL to Lowell, OH, which led to Bill and Peg restoring a beautiful Victorian home in Lowell. Antiques and old home restoration were passions he and Peg shared. The laughter and love that generated from that big ol' home at 321 Fourth St. touched the lives of everyone who entered it. Bill and Peg were incredibly active in their church and local communities. Being a "Giver" was of the utmost importance to Bill and he helped the AA community tremendously in his later years. Bill wholeheartedly loved his family. Bill's dedication to his family extended to his role as a grandfather. Known as "GB" or "Grampy Boy, Bill took great joy in this role, as demonstrated by the close relationships he shared with his 9 beloved grandchildren: Joshua (Bryana), Alexandra, Nicole (Ryan), Austin, Hannah, Annissa, Sarah, Emma and Grace. His nine grandchildren will remember Bill for his wit and humor, his love of ice cream, Da Bears, Da Bulls, the Cavs, "fairly fresh" snacks, the Dollar General, GBS (navigation tool), and the astonishing universal uses of duct tape. In 2019, Bill was overjoyed to become a "GranPaPa" to Oliver, his first great grandson. He was preceded in passing by his wife, Peg, and daughter, Pati. Always humble and kind with a sharp wit and good-natured sense of humor, Bill made a positive impact on so many lives. His family and friends were blessed. Bill's was a life well lived. The Coley Family profoundly thanks ComfortKeepers and Compassus Hospice Care. Our family is deeply grateful for the years of genuine love and impeccable care our Dad received by their staff who became family. On Friday June 18, 2021 there will be a funeral mass at 11AM at St. Michael's the Archangel Church in Streator, IL with interment to follow at 12NOON in St. Mary's Cemetery in Streator, IL. Following mass and burial in honor of Bill's life there will be a lunch-in at 1PM at the Eastwood Country Club (tent). Bill's family will be present to welcome loved ones. In the meantime, hug your family, and make someone smile today in honor of Bill Coley. In lieu of flowers, memorial donations to Compassus Hospice 487 West Main St. Jefferson, OH 43162 would be most appreciated.

William "Bill" Patrick Coley of Lowell, OH gently passed away on February 6, 2021 after a valiant struggle with vascular dementia and Parkinson's disease. He was just shy of his 87th birthday and was surrounded by family. Bill Coley was born... View Obituary & Service Information

The family of William Coley created this Life Tributes page to make it easy to share your memories.

Send flowers to the Coley family.