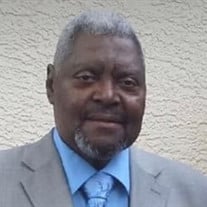 Rhunda Stanley Reeder was born on Tuesday, October 8, 1946 in Charlotte, North Carolina. He was the first child of three children born to the late Clyde Reeder, Jr. and Mary Alice (Thomas) Reeder. His family eventually relocated to Columbus, Ohio. He is a graduate of East High School and also attended Ohio University in Athens, Ohio. Rhunda served in the United States Army and was honorably discharged in 1969. Rhunda worked for Willis Beauty Supply, as a Warehouse Manager for many years before leaving to work for the Franklin County Juvenile Detention Center, where he retired from in January, 2016. Rhunda was united in marriage to Novella Jones on April 10, 1971. From this union they celebrated the birth of daughters Kimberly D. Reeder, Tracey L. Reeder-Bush and also his first born daughter Monika S. (Reeder) Payne. He loved to bowl, play chess, watch sports (football and basketball) and playing games with his grandsons on the Play Station and Wii. At a young age, Rhunda accepted Christ into his life and was baptized. When he reunited with the Christ Memorial Missionary Baptist Church he became an active servant of God. He was president of the Usher and Trustee ministries; vice president of the Deborah Missionary Society' member of the Finance Board and Ambassadors for Christ; and Sunday School teacher. He also worked faithfully with the CMBC Choice Food Pantry and Produce Market ministries. On December 17, 2014 Rhunda was ordained a deacon by Pastor Fowler. Passion for God, respect for leadership, love, integrity, humility, gentle strength, and service were the core attributes that Rhunda consistently exhibited as a deacon. He also served as a liaison to the Pastor. Rhunda loved God and his church family. He served faithfully under the pastoral leadership of Reverend Shedrick L. Fowler, until his passing. Rhunda went home to be with the Lord on Tuesday, June 15, 2021. He was preceded in death by his parents, Clyde Reeder, Jr. and Mary Alice (Thomas) Reeder; sister Diathia, niece Diathia Jackson Reeder; grandson Robert S. Coleman and dear friends, Urice Ross and Melvin Smith. He leaves to cherish his memory, his loving and devoted wife, Novella Reeder; daughters Monika (Corey) Payne, Kimberly Reeder and Tracey Reeder-Bush; grandchildren, Karlonte', Montez, Kaliyah and Malaysia Hagens, Stacey Bush and Kristopher Broadnax; great grandchildren, Kamari and Kadance Hagens, Aerial Hagens and Kay'Loni Hagens; sister Loretta (James) Lake, nephew James Lake Jr., and a host of other nieces, nephews, cousins and friends. He will truly be missed by all.

The family of Rhunda Stanley Reeder created this Life Tributes page to make it easy to share your memories.

Send flowers to the Reeder family.