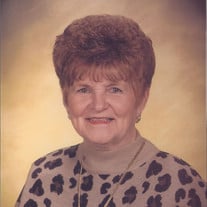 Renate Ludwina Linley-Wright, age 85, of Columbus, Ohio, passed away on November 15, 2020. She was born on August 17, 1935 in Heilbronn, Germany to the late Peter and Frieda (Wanner) Rossnagel. Renate is a native of Heilbronn Germany where she met her husband, Homer Linley while he was in the U.S Army. In 1954 Homer and Renate moved to the United States and were married for 33 years before he passed. She then married Charles Wright in May of 1998 and they were married 20 years before he passed in November of 2017. Renate was a member of Holy Family Catholic Church; where she ran the soup kitchen and food pantry for 20 years. In addition to the Church, she was a member of the Ladies Axillary and the Germania Club. She loved spending time with her grandchildren and great-grandchildren. She enjoyed her flower gardens. Renate was preceded in death by her first husband, Homer Linley; second husband, Charles Wright; parents, Peter and Frieda Rossnagel; sister, Laurie Keifner; brother, Peter Rossnagle; daughter, Margit Hardy She will be greatly missed by her daughters, Dollie Kloh and Monica (Harry) Starkey; 10 grandchildren; 23 great-grandchildren; sisters, Ella Keller, Inge Durrich, Christel Schmelzle, and Peggy (Warren) Nichols; and a host of loving nieces, nephews, cousins, and extended family members. Family will receive friends on Thursday November 19, 2020 from 12pm-3pm at Heart and Hope by Schoedinger, 3030 W. Broad Street, Columbus, Ohio, 43204. A Mass of Christian Burial will be held on Friday November 20, 2020 at 9:30am at Holy Family Catholic Church, 584 W Broad St, Columbus, OH 43215. Interment to follow at Green Lawn Cemetery.

Renate Ludwina Linley-Wright, age 85, of Columbus, Ohio, passed away on November 15, 2020. She was born on August 17, 1935 in Heilbronn, Germany to the late Peter and Frieda (Wanner) Rossnagel. Renate is a native of Heilbronn Germany where... View Obituary & Service Information

The family of Renate Ludwina Linley-Wright created this Life Tributes page to make it easy to share your memories.

Send flowers to the Linley-Wright family.