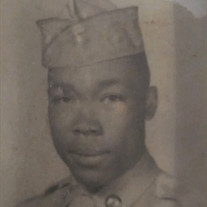 Louis Arthur Blakey Sr., age 91, of Columbus, Ohio, passed away on June 25, 2020. He was born on February 21, 1929 in Low Moor, VA to the late John and Lucille Blakey. Louis was an avid fisher and bowler. He enjoyed The Ohio State Buckeyes... View Obituary & Service Information

The family of Louis A. Blakey Sr. created this Life Tributes page to make it easy to share your memories.

Send flowers to the Blakey family.