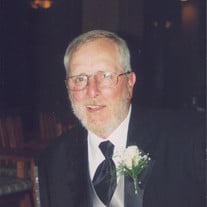 Gilbert Steele Metcalf Died December 18th, 2020. Born May 21, 1943 to Raymond and Mona Metcalf in Columbus, OH. He was proceeded in death by his parents and his son Rodney Metcalf. Survived by his daughter, Karen Myers - husband Martin.... View Obituary & Service Information

The family of Gilbert Metcalf created this Life Tributes page to make it easy to share your memories.

Send flowers to the Metcalf family.