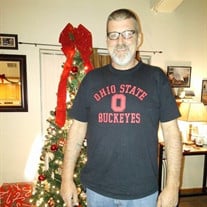 George W. Collins, age 55, of Columbus, Ohio, passed away on October 3, 2020. He was born on October 25, 1964 in Columbus, Ohio. George owned his own business and worked many years as an entrepreneur. He loved racecars and owned his own at one point representing number 22 at Columbus Motor Speedway. George was a Godly man and he worked everyday to try to turn his life around to live that way. He was known to be the light of the room and center of attention. He could turn any bad situation into a laugh. He had a deep love for his family and was known, loved, and respected by many. Georges personality and humor will live on through is daughter Melissa and grandson, Payton. George saved 3 lives through organ donation. He was preceded in death by his father, George C. Collins; sister, Vina Samples; and niece, Alex Collins. George will be greatly missed by his children, Jennifer McIntyre, Melissa Woods, Christy (Steven) Swanson, Johnathon Marcum, and Ive Collins; mom, Marian Sue Collins; grandchildren, Ayden Bunch, Jaceleigh and Leeam McIntyre, Payton Penson, Kylie Fryman, Danica Woods, Kenzington and Sophia Swanson, Hunter, Jaylee, and Jameson Marcum, Raelynn Collins; mother, Dalphene Farley; siblings, Joseph (Tamra) Collins, Daniel (Angie) Farley, Benjamin (Sarabeth) Collins, Goldie (Jack) Fraley, as well as stepped up to raise 5 other children; and a host of extended family members. Family will receive friends from 4-7pm on Monday October 12, 2020 at Heart and Hope by Schoedinger, 3030 W. Broad Street Columbus, Ohio; where a Private Service will be held on Tuesday October 13, 2020 at 10am. There are only allowed 25 people in the building for the service, but if you would like, you may come to the funeral home and stay in your car and watch the live webcast on the website.

The family of George W. Collins created this Life Tributes page to make it easy to share your memories.

Send flowers to the Collins family.