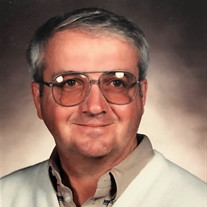 Gary L. Link was born on July 11, 1939 and went to Heaven on January 12th 2021 following a short battle with cancer. Although saddened, those who knew him rejoice knowing that he is in the presence of God, free of pain, and reunited with his true love, Ronda. Gary graduated from West High School, class of 1957 followed by service in the United States Army. He went on to obtain a BS in education from The Ohio State University and an MS in Secondary Administration from Xavier University. Mr. Link, as he was known by many, taught for 30 years at West High School from 1962-1991. Gary was a greatly loved and respected teacher of U.S. History, World History, Geography and Economics. He also coached football, baseball, basketball, golf, and girls softball, served as a Class Advisor and Ski Coach. In 1975, Coach Koblentz and Gary led the West High boys baseball team to a state championship victory. This game is still the highest scoring game in OHSAA baseball state tournament history! During his summers and after retirement, Gary worked for the Franklin County Engineers as well as Roxanne Flowers. He served his community as a Hilltop Y's Men and member of Hoge Memorial Church. He was an avid skier and loved traveling to Cape Cod and Yankee games with his family. Preceded in death by, Ronda, his beautiful wife of 57 years and reason for living; parents Charles and Sarah Link; in-laws Opal and Theodore Graham. Gary and Ronda were blessed with two fine sons, Ron and Rick Link; daughter-in-law, Kellie; grandchildren, Rachel and Alexandra; Debbie Ortiz (Danny), Scott Boyd, Steven Boyd, Rachel Syed (Nadir); great-grandchildren, Makayla, Malia, Maya, Bentley, and Zayn; brother, Bill (Peggy) Link. Family will greet friends from 3-7 pm on Monday, January 18th, 2021 at HEART AND HOPE FUNERAL HOME by SCHOEDINGER (Hilltop Chapel), 3030 W. Broad St., Columbus, Ohio 43204. Private funeral and burial services will be officiated by Pastor Tom Billman. In lieu of flowers, contributions can be made to Hoge Memorial Church, 2930 W Broad St., Columbus, Ohio, 43204.

Gary L. Link was born on July 11, 1939 and went to Heaven on January 12th 2021 following a short battle with cancer. Although saddened, those who knew him rejoice knowing that he is in the presence of God, free of pain, and reunited with his... View Obituary & Service Information

The family of Gary L. Link created this Life Tributes page to make it easy to share your memories.

Send flowers to the Link family.