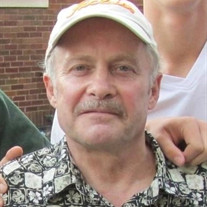 It is with a loving heart that we mourn the loss of G. Scott Buzard who passed away on December 11, 2021, after a brief illness. Scott was born on April 9, 1947 to Dr. James L. Buzard and Shalmir Buzard. He attended Holy Name Catholic School until the 7th grade before moving to Akron where he graduated from Akron Springfield High School. Scott attended University of Akron where he studied Psychology and was a member of Theta Chi Fraternity and The Ohio State University. He retired as a General Real Estate Appraiser in 2008. Scott loved all sports and was a great "sports historian" throughout his life. He was an avid Ohio State fan, as well as a supporter of the Cleveland Browns and the Cleveland Indians. He also followed his former high school football program, where he also played football. He supported the Bishop Ready Silver Knights sports programs where our children attended high school. He is preceded in death by his parents, Dr. James L. Buzard and Shalmir Buzard and brother, Brian Britton. Scott is survived by his wife of 33 years, Deb Dahlen Buzard; daughter, Hannah Mae Buzard; sons, James Ernest (Kristen) Buzard and Gard Scott (Cheryl) Buzard; grandchildren Tyler, Ryan and Haley Buzard and 3 great-grandchildren; sister, Rebecca Britton of Akron, Ohio; brothers-in-law, Duke (Susan) Dahlen and Dan (Elizabeth) Dahlen of Columbus, Ohio; sister-in-law, Souad Britton of N. Canton, Ohio; 13 nieces, nephews and great nieces and nephew; longtime friend Cherry Bell; and his "good buddy" Jim Perkins. Scott had a great understanding of the world around him. He was an avid historian and it was quoted by a good friend saying he was "Google" before there was Google. He loved his family above all else, was a very proud father, a supportive husband and a loyal friend. He was the most honest man to all who knew him. Scott loved good art, photography and being on the water, especially Lake Erie where we spent many summers together as a family. A visitation will be held on Thursday December 16, 2021, at Tremont Club, 4800 Tremont Club Drive (off of Davidson Road between Leap Road and Avery Road) from 5:00 p.m.- 6:30 p.m. Celebration of Life, officiated by Pastor Jeff Wise,will begin at 6:30 p.m. with a reception for family and friends immediately after. In lieu of flowers, the family requests that contributions may be made to the Bishop Ready High School Financial Aid Fund, in the name of G. Scott Buzard.

It is with a loving heart that we mourn the loss of G. Scott Buzard who passed away on December 11, 2021, after a brief illness. Scott was born on April 9, 1947 to Dr. James L. Buzard and Shalmir Buzard. He attended Holy Name Catholic School... View Obituary & Service Information

The family of G. Scott Buzard created this Life Tributes page to make it easy to share your memories.

It is with a loving heart that we mourn the loss of G. Scott...

Send flowers to the Buzard family.