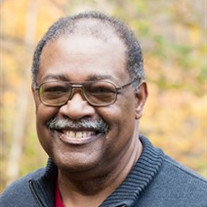 Fred Powell Smith Jr., 66, went to be with Jesus on November 20, 2020 at 8:36pm at St. Ann's Hospice. A private memorial service for the family will be held on Wednesday, November 25, 2020 at 7:30 at Broad Street Presbyterian Church. Friends and family can participate by watching the live stream at . Fred was born in Cleveland, Ohio to Flora Carson Smith and Fred Powell Smith Sr. on November 29, 1953. In 1973, he graduated from Central High School in Columbus, OH where he was a part of the "In The Know" Team, band, track, and wrestling. Fred attended Ohio Dominican College for two years before enlisting in the United States Marine Corps. He retired from Columbus City Public Schools; where he worked as a school bus driver for many years. Fred returned to college, enrolling at The Ohio State University where he completed a BA in Military History in 2009. Fred loved God, his family, reading, history, talking politics, and a good laugh. He valued the gift of knowledge and learning. He was an avid fan of both the OSU Buckeyes and the Cleveland Browns. He enjoyed going to the Westerville South Wildcat games both football and basketball. As a young man, Fred joined and remained a proud faithful member of Broad Street Presbyterian Church; where he was baptized by Rev. Ed Sensenbrener in 1963. He was also member of the American Legion. Fred married Diane Smith on April 12, 1980 in German Village; they were married for 40 years. Fred is preceded in death by his parents Fred and Flora Smith. He is survived by his wife Diane; their daughters Melissa (Michael) Cunningham of Westerville and Marlena Smith (Mike Schmitz) of Worthington; three grandsons: Aiden, Gavin, and Braelen Cunningham of Westerville; three sisters: Jamesina Smith-Person and Lenora Smith of Columbus and Dr. Mitzi Smith of Decatur, GA; and nieces, nephews, and many other family members. Fred's family will always love him and will greatly miss him. In lieu of flowers: Donations can be made either to his immediate family to assist with medical expenses, (notify a family member for address) or to Broad Street Presbyterian Church, 760 E. Broad St. Columbus Ohio 43205 in Fred's name.

Fred Powell Smith Jr., 66, went to be with Jesus on November 20, 2020 at 8:36pm at St. Ann's Hospice. A private memorial service for the family will be held on Wednesday, November 25, 2020 at 7:30 at Broad Street Presbyterian Church. Friends... View Obituary & Service Information

The family of Fred Smith created this Life Tributes page to make it easy to share your memories.

Send flowers to the Smith family.