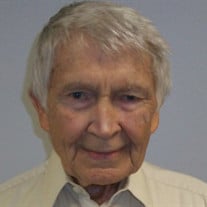 Emil J. Kunzi Jr., age 93, of Columbus, Ohio, passed away on December 19, 2019. Born on February 19, 1926 in Columbus, Ohio to the late Emil and Coribel Kunzi. Emil attended The Ohio State University where he graduated Suma Cum Laude and earned his B.S. in Pharmacy. He worked as a Pharmacist for 50 years. He volunteered for Life Care Alliance, where he was later employed until 2019. He was a member of the Swiss Club, Gruetli Society. Emil is preceded in death by his parents; daughter, Darlene Schmitt; brother, Donald Kunzi. Emil is survived by his children, Valentine 'Buddy' Gleich, Judith (William) Greer, John Kunzi, Jenny (Jerry) DeVore; 14 grandchildren, 31 great-grandchildren; 4 great-greatgrandchildren; and brother, John David Kunzi. Family will receive friends from 4-7pm on Thursday, December 26, 2019 at Heart and Hope by Schoedinger, 3030 W. Broad St, Columbus, Ohio; where a service will be held at 10am on Friday, December 27, 2019. Interment to follow at Sunset Cemetery. In lieu of flowers, memorial contributions may be made to Life Care Alliance, 1699 W Mound St, Columbus, OH 43223.

The family of Emil J. Kunzi Jr. created this Life Tributes page to make it easy to share your memories.

Send flowers to the Kunzi family.