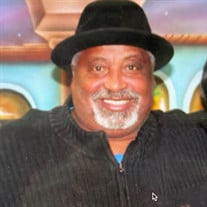 We lost our beloved son, brother, husband, father, grandfather, uncle, and friend Donald Darling Sr. Donald was born on August 22, 1954 to Isabella and Boyd Darling and departed this life on Saturday, June 6, 2020. Donald was born and raised in Columbus, Ohio. He graduated from Central High School in 1972. Donald played softball, basketball and ran track. Him and his twin brother Ronald were the dynamic duo on the basketball court, with their speed and athletic skills one would play tough defensive, while the other one stole the ball. After high school, Donald attended Waldorf University in Forest City, Iowa where he played basketball and studied Physical Education. Following a year in college, he went on to work in the kitchen at Children's Hospital and other jobs in Columbus before retiring as a driver from COTA. Donald was a friend to all that came in contact with him. He never met a stranger, as he would speak to everyone. Donald was notoriously known as the "Mayor of Delbert Road", keeping up with the day to day business of everybody in the neighborhood. Donald had a love for his family and enjoyed spending time with his family and friends. He was the organizer for the large family cookouts and holiday celebrations, calling everyone to tell them what to bring and maintaining his list. Donald leaves to celebrate his life and cherish his legacy, ex-wife Patricia Smith, four children, Donald, Ronald (LeTia), Dewand (Stephanie) Darling and Helen (Orlando) Darling-Tot; three siblings, twin brother, Ronald Darling, sisters Jacqueline Washington, and Shirley Waller; thirteen grandchildren, Darnell, Arionna, Jayvaun, Gladys, Chanya, Jajuan, Jalen, Nevaeh, Ronald Jr., Amber, Deja, Dewand Jr., Donald III; one great grandchild, Akyli. Alicia Smith, LaCrisha Darling his nieces and a host of other nieces, nephews, relatives and friends. Donald was preceded in death by his parents Isabella and Boyd Darling; brothers, Booker (Nem), Freddie, and John Darling. Visitation will be held on Thursday, June 18, 2020 from 4-7pm at Heart and Hope by Schoedinger, 3030 W. Broad St, Colum­bus, Ohio 43204. There will be a graveside service on June 19, 2020 around 12pm at Union Cemetery.

The family of Donald Darling created this Life Tributes page to make it easy to share your memories.

Send flowers to the Darling family.