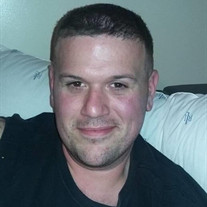 Derrick William Ridgway, age 38, passed away on May 22, 2020 at his home. Derrick was born in Columbus, Ohio on September 19, 1981 Derrick was an active volunteer and member at Saint Mary Catholic Church. He attended Columbus State Community College and Devry University where he focused on Web Design. Derrick was pursuing his license in Real Estate at the time he passed. He enjoyed gaming, sports, crafts, reading, and writing. One of his most favorable accomplishments was having a book published by Tate Publishing called "The Fall of Freedom: Phoenix Rising." He was beyond proud of his daughter for designing his book cover. The book was available on Amazon as well as AbeBooks. Derrick will be well remembered for his sense of humor, his stubbornness, his extreme intellectual mind, and most of all, his love for his children. Derrick is preceded in death by his grandparents, Mario Siravo, Patricia Siravo, Charles Ridgway Sr., and Linda Ridgway. He is survived by his wife, Stephanie (Waite) Ridgway; his parents, Charles (Sara Vickers) Ridgway Sr. and Anita Ann (David) Hughes; brother, Charles William (Joe) Berka-Ridgway; three children, Audrey Nichole (Rebecca Stanett) Ridgway, Annabella Nicole, and Alexander Xavier Ridgway; numerous aunts, uncles, cousins, and friends. A Memorial Service will be held at 10 AM on Tuesday, June 9, 2020 at St. Mary Catholic Church located at 684 S. Third Street in Columbus, Ohio. After the service, there will be a procession to St. Joseph Cemetery in Lockborne, Ohio. In lieu of flowers, please consider donations to National Treatment Quality Initiative http://shatterproof.org/

Derrick William Ridgway, age 38, passed away on May 22, 2020 at his home. Derrick was born in Columbus, Ohio on September 19, 1981 Derrick was an active volunteer and member at Saint Mary Catholic Church. He attended Columbus State Community... View Obituary & Service Information

The family of Derrick Ridgway created this Life Tributes page to make it easy to share your memories.

Send flowers to the Ridgway family.