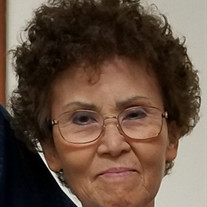 Daugherty, Chong Suk (Choe) 1953 - 2020 Beloved Mother and Wife, Chong went peacefully to Our Lord on December 4, 2020 at St Ann's ICU after a tough battle with Covid and other medical issues. Chong was a 24-year resident of Galena, OH and a member of St. John Neumann's Parish. She was born in Seoul, S. Korea on October 28, 1953 during a time of devastation and a dispersed population due to the Korean War. Her parents became separated during the conflict and each thought the other was dead. Her mother, Song Sun Cha, passed away and her grandmother raised her until she was about 8 years old. The grandmother found out that Chong's father, Choe Chin Song, survived the war and was living in Kangwon-do near the mountain terrain that separated the two Koreas. She moved in with her father's family and at once was the newest and oldest child in the family which was an awkward situation that eased over time. Her father owned and ran a lumber mill business with reasonable success. In Korea, Chong was pre-deceased by her father and mother and a younger brother named Choe Gi Ho. She is survived by her sister Choe Chong Min and a brother Choe Yong Ho. In the States she is survived by her husband of 47 years, Richard, their daughter, Misa Suk, and a myriad of relatives from the clans of Daugherty, Heck, Goodrich, Wolcoski and Bell. Chong was a delight to other family members who knew her as happy, personable, a good story teller and fun to be around. She was an energetic person, and a hard worker consistent with a typical Korean upbringing. A task was something to start and finish and she could not understand the attitude of a lazy person. She was a loyal friend that a person could count on. After High School she returned to Seoul and later moved to Uijongbu north of Seoul where she worked in a tailor shop. Uijongbu was the location of the Medical Army Surgical Unit (MASH) during the war as portrayed in the TV show MASH. It was at the tailor shop that she met her husband Richard who brought in a jacket to have some Korean emblems sewn on and they started dating. Richard was an Army Specialist 5 and had just finished a tour in Okinawa and volunteered for a tour in Korea. He was stationed at Camp Red Cloud on the outskirts of Uijongbu at a time of high border tension. They were married April 30, 1973 at the US Embassy in Seoul. They departed for the States at the end of his tour and stopped in Colorado where Chong first met Rich's older brother and his family. Then on to Ohio to meet the rest. She was a military spouse for the next 20 years following Richard from one posting to another be it in the US or Europe or Asia. Chong was with him the entire time through assignments in Los Angeles, the Presidio, Nelligen Kaserne (near Stuttgart Germany), Fort Dix in NJ, Fort Bragg in NC, Yongsan Compound in Seoul (where baby Misa joined the family), and to Fort Ben Harrison in Indiana. She never complained about the frequent moves and enjoyed the new locales and peoples. Over the years she babysat for other Army families, worked in a NJ factory, a military dining facility, nursing homes, hotel, hospital, and a State Juvenile Detention Facility. She always outworked those around her. Chong enjoyed her life and loved her family and friends. Chong was charitable and she and Rich would look for needy families where they lived and help them out during a time of need and on special holidays. She had a good heart, great energy and enjoyed working in the yard on our 3 acres. Chong became a US citizen on July 1976 - the bicentennial of our country's founding. She was ever a loving Mom to Misa and a beloved wife and partner to her husband. She is missed and there is a hole in our existence. But time will make us love and appreciate her all the more. Chong was 67 years old and we did 47 of those years together; raised a kind and compassionate daughter; and a beagle named Judy who was Chong's constant companion and who sleeps in her bed since she's been away. Chong opted for cremation and Covid restrictions ruin any practical funeral service. We will place her urn in a crypt in the mausoleum at Kingwood Memorial Park on US 23 (Columbus Pike) at a time when the weather is decent enough for an outside interment. Her crypt will overlook the area where Mom and Dad (Don and Dorothy Daugherty) are buried.

Daugherty, Chong Suk (Choe) 1953 - 2020 Beloved Mother and Wife, Chong went peacefully to Our Lord on December 4, 2020 at St Ann's ICU after a tough battle with Covid and other medical issues. Chong was a 24-year resident of Galena, OH and... View Obituary & Service Information

The family of Chong Daugherty created this Life Tributes page to make it easy to share your memories.

Send flowers to the Daugherty family.