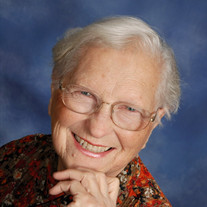 Benny Blythe Linder Hitch was born in Rock Hill, South Carolina on September 2, 1930. On October 28, 2020 she was welcomed by her Lord and Savior into her eternal home. Blythe was the second daughter of six children to Rev. James Benjamin and Evelyn Linder. Her daddy thought he would not be blessed with any sons after she was born and wanted to make sure the family name of Benjamin was passed on - thus Benny Blythe. The family, subsequently, had four sons. Blythe grew up in a minister's home and loved going to church each Sunday. She was still singing Sunday School songs and hymns from her childhood days. After high school graduation she moved to Nebraska to live with her Aunt Ruby and Uncle Ed to attend college. Aunt Ruby operated a boarding house for young men attending Nebraska Wesleyan with intentions of going to Seminary. Blythe graduated from Nebraska Wesleyan with an education degree in 1951. While living at the boarding house, Blythe met Francis Hitch. They courted, fell in love, married on June 2, 1951 and began their life long adventure of ministry together. Francis and Blythe's first pastorate was at Trinity Baptist Church in Council Bluffs, Iowa. Blythe Ann, Linda and Bryan were born while serving this church. First Baptist Church of Fort Madison, Iowa was the next church the Hitches served and another child was born. Their second son, Neal was welcomed by his three older siblings. The Hitches then relocated their young family to Fairbury, Nebraska where they served from 1965 to 1970. While in Fairbury, Blythe taught Art at the local high school and 4th grade at Park Elementary. In 1970, Francis and Blythe received a call to pastor a church in Columbus, Ohio. This was a major move for the family, but they felt God's leading and accepted the call to serve at Hillcrest Baptist Church on the Hilltop. Blythe ministered with Francis for the 20 years he was Hillcrest's Pastor. She continued to serve in all aspects of ministry at Hillcrest even after Francis had retired in September 1990. Blythe served as Sunday School Teacher, Sunday School Superintendent, VBS Director, ABW President, Sonshine Club President and many other positions throughout her 50 years as a member of Hillcrest Baptist Church. Blythe also worked outside the home as a school teacher for Columbus Public Schools. She was an ardent supporter of the public school system. She taught 2nd, 3rd and 4th grades over her many years of teaching. Blythe was teaching at West Broad Elementary School on the Hilltop when she retired in 1995. Blythe was also the visionary for the Christian Conference Center. In 1979, she attended a conference that was being held at 245 North Powell Avenue. While attending the meetings, a tour was given of the property and information shared that it was for sale. Blythe began to dream and realized this facility was an answer to her and Francis' prayers. The Hitch family had a singing ministry and were looking for a location where all the extended families could live and do ministry together. In August 1979 the property was purchased and the Christian Conference Center began its 40 year ministry on the Hilltop. Blythe wanted to teach, mentor, train and develop Christian leaders in the community. The Center was used for conferences, training, seminars, church and family gatherings. The other ministry that was birthed was Myti Oaks Daycamp. Weekly daycamps were held each summer for 38 years which included musical, drama and sports training, as well as, leadership development. Blythe had a remarkable and full life. While living in Columbus, another son was added to the family Jamey Sintz came to live with us in 1986 and became an "adapted" son. She was preceded in death by her husband, Francis; her parents, Rev. James Benjamin and Evelyn Linder; sister, Jo Dunlap (Linder) and brother, James Benjamin Linder. She is survived by her brothers: Jon Linder and Katherine, Neal Linder and Mona and Paul Linder and Susan; children: Blythe Ann Cooper (Hitch) and Mark, Linda Mahone (Hitch) and Steve, Bryan Hitch and Terry, Neal Hitch and Deneen, James Sintz and Christina; grandchildren: Aaron and Laura Cooper, Jared and Kara Mahone, Chad and Amanda Cooper, Stephanie Mahone and Michael Wente, Jeremy Hitch, Emily Anderson (Hitch) and Kyser, Martin Hitch and Kelsey Miller, Jacob Hitch, Lucas Hitch and Kristina Fisher, Victoria Sintz, Bryan Hitch, Jr, Davis Hitch and Connor Sintz. And those who called her "GG" and brought her great joy in these recent years: Liliana and Joseph Cooper, Landon, Preston, Cannon and Hudson Cooper, Cameron and Murphy Mahone, Tilly and Taylee Anderson. A memorial service will be held at a later date.

Benny Blythe Linder Hitch was born in Rock Hill, South Carolina on September 2, 1930. On October 28, 2020 she was welcomed by her Lord and Savior into her eternal home. Blythe was the second daughter of six children to Rev. James Benjamin and... View Obituary & Service Information

The family of Benny Blythe Hitch created this Life Tributes page to make it easy to share your memories.

Send flowers to the Hitch family.