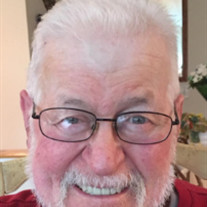 Arthur J Sparks peacefully passed on June 9, 2020 at the age of 93. He was known to all who loved him as "AJ". AJ was born at Blaine, Kentucky, the eldest son of Allen and Lockie Sparks, having one sister, Ethel (Freeman) and two brothers, Charles (Dorothy) and Arlie (Betty). He was the last remaining of his siblings. AJ loved and believed in his Country asking his Mother for permission to join the Navy at age 17 and then served in WWII at Iwo Jima. Those closest to him enjoyed his many Navy stories, both the serious while on-duty and more humorous while on-leave. Arthur continued his education at Morehead University, moved to Columbus, and obtained his hairdresser's license. Arthur was owner of Michael's Beauty Salon for 40 years and was by nature an artist and seeker of beauty. Arthur married Marilyn Barger in 1951. Marilyn gave birth to son, Stephen and daughter, Patti before she unexpectedly passed during pregnancy in 1959. Arthur considered Marilyn's first-born daughter Jane, of San Diego, California, as his own 'adopted daughter'. Arthur was a devoted Father to his children. He married second-wife Kathryn Culler in 1961. She also predeceased him in 2004. Arthur was a member of First Community Church of Marblecliff. Arthur was an avid Ohio State Buckeye fan proudly boasting that he and Woody Hayes both arrived in Columbus the same year. In addition to his vegetable gardens and fruit trees (the Paw-Paw trees being his favorites), AJ started growing roses in the 70s. He was a prominent Ohio Rosarian, being President of the Columbus Rose Club, President of the Central Ohio Rose Society, a member of the American Rose Society, and Editor of the Buckeye Rose Bulletin. AJ later became a statewide Rose Judge and was awarded the coveted Silver Honor Medal. He was also awarded the Outstanding Judge Award in 2002. AJ was featured in the Columbus Dispatch for his roses which at one time numbered over 200. AJ was employed at the Vorys law firm in the 1990's until his retirement. It was not uncommon to have a court recess called so that AJ could answer an important rose-growing question for a judge friend on the bench. AJ was known for his honor, his exceptional sense of humor, and his outlook on life. During retirement AJ authored and published three books based on his life which will be long cherished by family and friends. Arthur is survived by his loving daughter Patti (Jim) Allen, son Stephen (Lynn) Sparks and his grandson, Ryan Smith. There are many nieces and nephews who loved their Uncle Arthur. Dear friends are many including John and Sue Dickman, Tom Wood, and long-time neighbor, Jo Jefferies. The family wishes to thank the committed doctors and staff of the VA Ambulatory Care Center of Columbus, the dedicated staff of Arlington Court Skilled Nursing Facility who treated AJ for the past five years, and more recently the OhioHealth Hospice Staff. A crypt-side service with Military Honors will be held at Sunset Cemetery, 6959 W Broad St, Galloway, OH 43119, on Monday June 15, 2020 at 2pm inside of the mausoleum. In lieu of flowers, the family requests that Memorial Contributions for "AJ" be given to The Columbus Area Humane Society or OhioHealth Hospice.

Arthur J Sparks peacefully passed on June 9, 2020 at the age of 93. He was known to all who loved him as "AJ". AJ was born at Blaine, Kentucky, the eldest son of Allen and Lockie Sparks, having one sister, Ethel (Freeman) and two brothers,... View Obituary & Service Information

The family of Arthur "AJ" Sparks created this Life Tributes page to make it easy to share your memories.