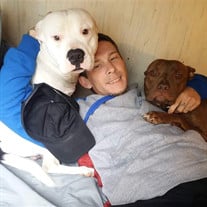 Aaron A.J White II, age 34, of Columbus, Ohio, passed away unexpectedly, December 23, 2019. He was born on September 8, 1985 in Columbus, Ohio, to Aaron White and Catherine Goodhart. Aaron graduated from Whitehall Yearly High School. He worked many years as a Carnival Worker. He enjoyed that job as he got to travel several places in the United States as well as Mexico, and Puerto Rico. He was a very loving father and loved to spend time with them. He is preceded in death by his grandparents, James and Mary Thomas; and brother, Joseph Red Thomas. Aaron is survived by his father, Aaron (Becky Parsons) White; mother, Catherine (William) Goodhart; grandparents, Sandra and Phil White; brothers, James (Misty) White, Joshua White, Miles Oneal Goodhart, Zakry Jole Goodhart; sister, Tiffany White; children, Luna and Jackson White and their mother, Tiffany Craig, son, Anthony; and many aunts, uncles, nieces, and nephews. Private services will be held at a later date.

The family of Aaron A. White created this Life Tributes page to make it easy to share your memories.